With only three more School for Deacons' Weekends to go I wanted to take time to look back to where I've been. In some ways it's like riding on a train or in an aircraft in a rear-facing seat--It's difficult to see where you are going, but the view looking back is amazing.
The amount of work that is behind me is substantial: 30 courses all together, plus numerous retreats, and three weeks in Panama. It's hard to believe I've completed all of it looking back. I fully recognize, though, that I didn't do this on my own, but only with the help of the Spirit.
Persevering in your efforts; hanging onto "Just one more thing": having the encouragement of a fellow classmate: All of these things contribute to the forward movement. When it comes down to it, however, the most important piece of all is grasping onto the the belief that God is calling you to this ministry, and her Spirit will help carry you along the way when times are toughest.
At some point in this journey you realize that you also are there to reach out to the people in the process behind you and encourage them in following this path.
May God reach out to your heart and give you the courage to take up this call.
At the midpoint of this semester I preached the following at Evening Prayer on March 3rd:
Genesis 43:16-34
Mark 5:1-20
In listening to our two seemingly unrelated readings this evening I was suddenly struck with the realization that they both share an almost invisible theme of The Unexpected Turn in a way I hadn’t seen before.
In our view of Joseph this evening we see a man who has reached his peak in power and influence in the Kingdom of Egypt. Joseph is not a mere steward of Pharaoh, distributing grain and amassing wealth for Pharaoh’s treasury. When Joseph had interpreted Pharaoh’s dream of seven fat years with seven lean years Pharaoh had recognized the Truth of God within Joseph and made him a Priest of Heliopolis, the center of worship for the Sun-god Atum, later known as Ra, by decreeing the marriage of Joseph to Asenath, daughter of the Chief Priest of Atum. Joseph, then, is a priest who delivers bread to the people of the kingdom.
Through no fault of his own, young Joseph became the envy of his brothers, being deemed by Jacob as his favorite. While his older brothers were sent out to the fields to care for the flocks, Joseph was kept at home, the joy of his father’s eye. Poor Joseph was so naïve, that he didn’t even realize his brothers’ envy of his position. I wonder how long it took Joseph after he was thrown into the well to realize something was amiss. Did he sit in that well thinking it was some kind of brotherly joke? Was it several days after being chained to a caravan before his eyes were opened?
In spite of the physical duress he was under as a slave, as many of us know it’s the emotional pain that hurts the worst. I can hear Joseph saying “My brothers, my closest friends, did this to me? Was my father in on this, too?” The heartbreak must have been unimaginable. How awful and deep it is when we are hurt by the ones we love.
Rather than fall into despair, Joseph lived with the faith of Jacob and decided to serve well 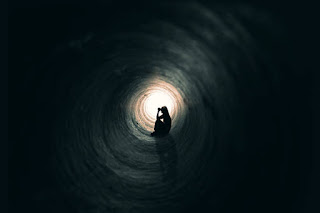 wherever he was sent. In other words, Joseph chose to live righteously in spite of his unjust situation. As a result, “The Lord was with Joseph, and he became a successful man” [Gen 39:2]

This way of righteous living didn’t always endear Joseph to people. For refusing Potiphar’s wife’s advances Joseph was falsely accused of assault and thrown into prison.
Even in Pharaoh’s dungeon Joseph continued on his righteous way of living, caring for the other prisoners. How often did Joseph question God’s faithfulness through all of his travails? After all, Joseph lived in slavery or prison for almost 20 years before Pharaoh finally took notice of him. Twenty years of darkness and misery, but clinging to one’s faith in God. Imagine how challenging that would be!!
Finally, after being released and marrying Asenath, who bore him Manasseh and Ephraim, Joseph is reported to have said “God has made me forget all my hardship and all my father’s house.” [Gen 41:51]
In today’s reading it’s almost 10 years later that Joseph’s brothers show up asking for food for their people. The real humanity of Joseph shows through, however! Joseph is not some kind of hagiographic saint who has fully forgiven and forgotten—after all, he throws his brothers into prison for 3 days on false charges of being spies. He keeps Simeon incarcerated while demanding the other brothers bring back Benjamin. He arranges to falsely accuse Benjamin of theft, and making him a slave, before he finally reveals his true loving self to his kinfolk. I can easily imagine the inner struggles Joseph suffered through—the temptation he wrestled with to use his absolute power to wreak fully-justified revenge.
It is this very real, human inner conflict in Joseph involving the choice between the intertwined emotions of heartbreak, revenge and power, on one hand, versus living righteously and lovingly before God, on the other. Each one of us suffer through this same kind of inner conflict today, don’t we? What an Unexpected Turn of understanding!

In our scene this evening from Mark we meet one of the most famous unnamed persons of the Gospel—the demoniac afflicted by Legion. This poor man had become so out of control that not even chains could hold him, so he lived among the dead of that area—a lost soul dead to the world, but not even buried in peace. 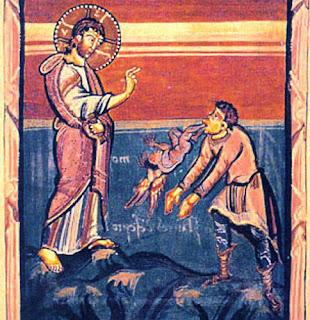 How long had he lived with this affliction? The Gospels don’t tell us. What did he eat? Insects? Plants? Dead animals? Food scraps left on occasion? He had been constantly tormented by these demons inside, beating himself with stones—caused by the demons? Or an attempt by himself to end his torment? Perhaps both!
He immediately rushes to Jesus and addresses him as “Son of the Most High God”, an appellation of Greek origin, not surprising since this area is called the Decapolis—the ten Greek cities. While in other stories Jesus seems hesitant to heal non-Jews, Jesus immediately works to cure this poor creature, out of empathy for the plight of this most cast-out person. Can you be any more of an outcast from society when you are living among the dead?
From this community’s perspective this man is dead to the world, but Jesus restores him to life by driving out the demons, and in their place leaving God’s peace. Imagine how relieved this man is—how quiet his inner self has become—how free he feels after all this time of confinement in an inner prison!
Is it any wonder, then, that this man now wants to follow Jesus and become one of his disciples! The surprising thing is Jesus sends him away!! What an Unexpected Turn!
How could someone who has only listened to Jesus a short time become a bearer of the Good News? By rushing down to the seashore to plead with Jesus to heal him, this poor, afflicted human demonstrated his own helplessness against evil. Even in the midst of his suffering he yearned to live a righteous life in God. While Jesus tells others “Let the dead bury the dead”, Jesus tells this former graveyard inhabitant to go out and “…Tell them how much the Lord has done for you…” This first preacher to the Gentiles proceeds to tell everyone what Jesus has done for him!
With little understanding of Jewish scripture or law, or expectation of a coming Messiah, this former demoniac equates Jesus with the “Most High God”. The only other person in Mark’s Gospel who makes this instantaneous declaration is another Gentile, the Roman Centurion who witnessed Jesus’ death on the cross.
The story of these two people, Joseph and the former demoniac, speak to us today of persevering in our faith while we overcome the many demons and hardships of our lives.
·        It is through simple and persistent faith that we find our way to the promise of God’s kingdom.
·        It is in recognition of our own human frailties that we find strength through the Spirit who lifts us up.
·        It is through our willingness to serve others, and bring them the Gospel of Hope, that we are healed of our own afflictions, too.
As we reach this halfway point of this semester let us reach out for God’s peace, which surely resides here among us, to renew our strength to continue on our journeys to a new beginning. Amen.
By Deacon Greg M at March 06, 2018
Email ThisBlogThis!Share to TwitterShare to FacebookShare to Pinterest