In Jesus’ day there were at least four groups vying for control of the hearts and minds of the people while hoping to bring the restoration of the kingdom of Israel: The Sadducees who believed they could accomplish this through meticulous Temple worship; The Pharisees who believed that people should live perfectly according to the Law of Moses; The Essenes who believed that people should live according to the Law AND be physically separated from outsiders; and the Sicarii who believed the kingdom would be restored by driving out the Gentiles through terror and assassination.
Each of these groups had their own method of determining who was part of the in-crowd and who was out—who was pure and who was impure—who were “real” Israelites and who weren’t.
Along comes our Rabbi from Galilee who preaches that the Kingdom of God includes everyone, especially those who are lost and broken. The task of those with faith, and money, and power is to go out and find the lost ones to bring them back into the fold, too.
This new way of envisioning the Kingdom of God unsettles those who are quite comfortable with the status quo. “What kind of message is this? How will we know our place in the world? How will we maintain order? How can blind people, beggars, and lepers ever be clean? This Rabbi is some kind of revolutionary, or mad man!! We need to silence him!!”
This radical message Jesus carried was of reconciliation and love—between each other, and between us and God. Jesus wasn’t mystically predicting the future destruction of Jerusalem—as any good prophet he was speaking truth to power and pointing out that the seeds of any society’s destruction were planted in the fertile ground of division and hate. I wonder what that says to us today.

Our commemoration today is for another follower of Jesus who preached this message of reconciliation and love: Fabian, Bishop of Rome, who served from 236 – 250, almost a century before the Church was subsumed by the Roman Empire. According to the historian Eusebius an assembly was held in Rome in 236 to elect a new bishop when a dove flew in and landed on this stranger’s head, so the people took it as a sign and elected this layperson, Fabian, as Bishop. 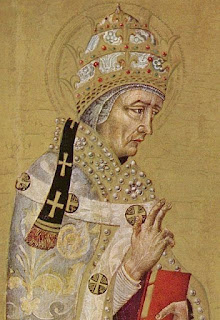 Now, before you start thinking this was some kind of honor, or recognition of saintly piety, the previous Bishop, Anterus, died during the persecutions of Emperor Maximinus the Thracian, and the one before him, Pontian, died in the salt mines of Sardinia, also thanks to Maximinus. One almost gets the sense of these Church leaders gathered in assembly, each thinking to himself “Oh heck no! Not me!” and then asking each other “Hey, who’s that stranger over there?”

Surprising everyone, Fabian’s tenure as Bishop of Rome lasts 14 years! What was his secret? History tells us some surprising things. Fabian cultivated amicable relations with the imperial government of Rome! Of course, it may have helped that Maximinus was killed trying to put down a Senatorial revolt two years after Fabian was elected—“The enemy of my enemy is my friend” still has value today!
Bishop Fabian also worked to heal the divisions between Christians by arranging the return of the remains of Bishop Pontian and the anti-pope Hippolytus from the salt mines of Sardinia. Hippolytus had criticized Pontian and Church leaders for being too lenient in granting absolution to Christians, causing opposing groups to form up within the Church—Again, arguing over “Who is in, and who is out?”
In the midst of a persecution of Christians, Pontian and Hippolytus were arrested and died in the salt mines at hard labor. By working to return the remains of both Church leaders Fabian helped heal the divisions that had long been simmering.
Bishop Fabian is also credited with re-organizing the Church in Rome, designating seven districts within the diocese, supervised by seven deacons! Clearly Fabian was concerned for the outcasts and downtrodden.
By keeping his focus on God’s love for everyone, and Jesus’ call to seek out the lost and heal divisions, Bishop Fabian restored the unity of the Church in Rome and focused the people on spreading the Gospel message. What does that say to us today?
<pause>
Two weeks ago we attended the Annual School for Deacons Retreat at the Bishops Ranch. I had been finding it difficult to find my inner calm—my inner center—as I progressed through the Advent and Christmas seasons, so this time of prayer and meditation was a much-needed reprieve from the world.
Like many people I had come to wonder if humanity has completely lost its collective mind. We have leaders who argue about whose button is bigger--whose hand is bigger—whose bomb is bigger. We have people in this country who want to designate who is American, and who isn’t—who is entitled, and who is worthless—who gets healthcare and who doesn’t.
In the midst of this madness one starts feeling like the sane part of humanity is diminishing, while hope for the future is being snuffed out.
As I focused on prayer and meditation at the Retreat I came to realize that the 24/7 Bad News cycle had overtaken the immortal Good News message within me. Worries of the future of our country, and the future of the world, had drowned out the message of God’s love and reconciliation that we are meant to carry within us. The gift from God of this beautiful day, here, right now, was being lost in a forest of fear and hopelessness.

I had lost sight of our Creator God who dances in joy with the works of her creation, but also weeps with us in our sorrows, and embraces us in our fears. I had lost my grasp on the message that the angel told Ezra in our first reading: “Go, tell my people how great and how many are the wonders of the Lord God that you have seen.”
As I came to this realization and re-focused my mind on Jesus’ message of God’s love and reconciliation, my inner peace returned, and I gained a new insight into this role as a deacon.
Deacons are called to “interpret to the Church the needs, concerns, and hopes of the world”, but we are also called to “make Christ and his redemptive love known…to those among whom you live, and work, and worship. [BCP p.543] Our role is to be at the door of the Church, with one foot in the outside world, and one foot in the Church.

This doesn’t mean that on Sunday the deacon is inside the Church doing their “spiritual thing”, and on Monday the deacon is out doing their “social justice thing”. We are not called to be “either/or”—we are called to be “both/and”.
A deacon who is out in the world focused on all the ills of society, while isolated from the Church, would be no more fruitful than a deacon who is focused on liturgical practice, isolated from the outside world.


As we gather this evening at this Table of Eucharist let us lay our fear and worries down. Let us be mindful of this evening—this hour—this minute as we worship together Emanuel: God with us. Let us feel God’s loving embrace and let her love and hope flow through our hearts and out into the world. And let us carry that love and hope every day as we reflect God’s kingdom to the world around us.  Amen.
By Deacon Greg M at January 21, 2018
Email ThisBlogThis!Share to TwitterShare to FacebookShare to Pinterest