I preached at the Good Friday service this year at my Parish Field Assignment at St. John's in Lodi, CA. Too many people want to jump over the pain of the cross and go straight to Easter Sunday and the Resurrection, but so much is missed by turning away from the pain of reality. It's not about guilt, it is about unbounded love. We are called!
Here is the sermon:
John 19:1-37

In a man’s world, women and children don’t count—they are insignificant! I would like to believe this is no longer true, but when you hear how women are treated in the workplace, or how children are afraid of going to school, I have to wonder… The fact remains, however, that in Jesus’ time women and children didn’t count.
Back then the status of most women was not much better than that of a slave—as wives they were treated as house servants,  and could be divorced and left homeless for any reason. More than half of the children died before the age of 10, and a third of women died in childbirth. Even in the story of the miracle of the fishes and loaves (John 6:10), a crowd follows Jesus, but only the men are counted.
It is this insignificant status of women and children that is a key point in understanding the truth of today’s reading, and the Gospel of John itself.
All of the other followers of Jesus have run away and are in hiding, fearful they will be arrested and added to crosses along the road to Jerusalem. 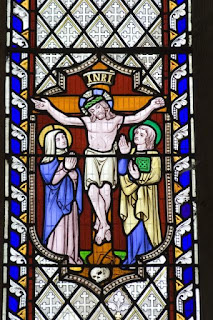 Abandoned by his followers, beaten and humiliated, stripped of his only possessions, now hanging from a cross as the soldiers get drunk and gamble over his garments, could any human feel any more abandoned and alone? Yet at this lowest point in his life, when his whole ministry must feel like a giant failure, a few of his closest followers, ones considered to be insignificant and worthless by the soldiers guarding the condemned, come and stand near Jesus, helpless to do anything but be with him in his final hours.

Our Creator is not a god who sits back and watches from a distance—God doesn’t meet us halfway—the Alpha and Omega was born into our world to share in our joys, sorrows, and pain—to find the lost, the broken, and the blind--and lead to us to new life!
Here we stand at the foot of the cross, at what must seem to the people around Jesus, the end of that life.  The Light of the World is being extinguished by the forces of darkness.
John recalls that Jesus was crucified on the day before Passover, at the same time the lambs were being prepared for the Passover meal. When Jesus says from the cross “I am thirsty” [19:28] John remembers a sponge was dipped in cheap wine and given to him on a reed of hyssop It was a hyssop reed that was dipped in the blood of the Passover lambs to mark the wooden doors and lintels in Egypt, protecting the Israelites from the angel of death.
Here John is telling us that the blood of the Lamb of God spread on the wood of the cross in Jerusalem will open the door to eternal life. This one man, Jesus, gives his life out of love for God and each one of us.
John records that the legs of the men crucified with Jesus were broken to hasten their death, but that since Jesus was already dead they drove a spear into him and “…at once blood and water came out.” [19:34] It is only in modern times that scientists have come to understand that breaking the legs of crucifixion victims caused immediate death by asphyxiation--and that stabbing a live person causes blood to flow out, but blood and water-like fluids flow out of a dead one.
John’s Gospel is not based on hearsay, or an oral tradition, but is an eye-witness account of real events by a follower of Jesus who was personally familiar with Judea and Jerusalem. If you were there, could you have ever forgotten what you saw in Jesus’ life or his death?
The Gospel of John records the unintended testimony made about Jesus by his worst adversaries:  the Temple authorities. They don’t deny that Jesus healed the man born blind [9:1-12], but call Jesus a sinner for healing someone on the Sabbath. Their trial proves this man has been healed, but they throw the man out of the synagogue because they are blind to the Truth, and refuse to hear the man’s testimony of Jesus.
In hearing that Jesus had raised Lazarus from the dead in front of a crowd of witnesses, the response of the Temple authorities is not doubt that it happened, but “This man is performing many signs. If we let him go on like this, everyone will believe in him…” causing Caiaphas to prophetically respond “…It is better to have one man die for the people than to have the whole nation destroyed.” [11:45-50] Salvation from one man, predicted by the high priest.
Finally, it is Pilate himself who declares Jesus “King of the Jews”. Messiah means Anointed One, or King. Little does Pilate know that Jesus is so much more than King of the Jews.
Writing his Gospel late in life, John carefully crafts his story not just to testify to the events he witnessed, but to answer the most basic question: What does it mean for us to become followers of Jesus? What should I do? How should I live?
In the first chapter the un-named disciple who searches out Jesus asks “Rabbi, where are you staying?” [1:38], expressing a curiosity--an openness to hear this Good News. He is baptized and goes on to participate in Eucharistic-like feasts, like the feeding of the 5,000 [6:1-15], growing in his faith.
At the Last Supper It is the un-named Beloved Disciple reclining next to Jesus. [13:24-25] It is the un-named disciple who slips Peter into the courtyard of the high priest during Jesus’ trial [18:15-16].
Finally, in the reading we just heard, it is the Beloved Disciple standing at the foot of the cross with Jesus’ mother, her sister, Mary the wife of Clopas, and Mary Magdalene. A teenage boy with the simple faith of a child, and several women with the love of a mother.
Even in his final moments Jesus is using his last breath to minister to others. He asks the Beloved Disciple to care for his mother whom he is leaving behind.

Ask yourself “Why doesn’t John name himself in all of these places? Why doesn’t John say “I was there” or “I did this” rather than speaking of himself in the third person?” The answer can be rather jolting: John is inviting each of us to become the Beloved Disciple.
John’s Gospel is an invitation to each one of us to become committed disciples of Christ—to become Jesus’ hands and feet and voices in the world—to care for those whom Jesus loves: the sick and the dying, the marginalized and the outcasts, the poor and the afflicted; humanity AND creation itself.
John tells us Jesus said “Just as I have loved you, you also should love one another. By this everyone will know that you are my disciples, if you have love for one another.”
Becoming the Beloved Disciple means turning away from being centered on the self, leaving behind all of those selfish things that separate us from God and each other. Becoming the Beloved Disciple means living a life centered on God and caring for others; of living in love and hope, and not in fear; of living life with opened eyes and opened hearts listening for the call of the Spirit.
On this solemn day of Good Friday, and into the morrow of Holy Saturday, the world waits in this thinness between life and death, just as it did back then. Think of how empty the world becomes without Jesus in it!
·        Let us accept John’s invitation to become Beloved Disciples.
·        Let us remember the love and healing Jesus brought into this world.
·        Let us feel for a brief instant the grief these disciples felt in losing their Teacher.

Discipleship calls us to perseverance.
Faith dares us to hope.
Love brings us to new life.
Amen.
Ref: “The Past from God’s Perspective” by Rev. Dr. Scott Gambrill Sinclair
By Deacon Greg M at April 02, 2018
Email ThisBlogThis!Share to TwitterShare to FacebookShare to Pinterest