Not my efforts, but yours, Lord!

Working full time and going to the School for Deacons is challenging in its own right. Inevitably family and life issues are thrown into the mix and you have days when you wonder if you'll make it to the next Weekend, never mind the end of the semester.
Depending on where I worked that day, I use the drive time home by listening to one of my favorite podcasts, Pray As You Go, a Jesuit Ministries program that uses a combination of music and scripture reading. Taking a bit of your day for prayer and meditation is essential to shifting gears to School and Church modes.
It was during one of these challenging times that the Spirit helped me with the following homily for Evening Prayer at the School for Deacons on Saturday October 21, 2017:
2 Kings 25: 8-12, 22-26
Psalm 110: 1-5; 116; 117
Matthew 11: 7-15

Expectations! I’ve come to wonder recently if expectations should be the 8th deadly sin—you know, after pride, greed, lust, envy, gluttony, wrath, and sloth. Or could it be it’s some kind of compound substance of the seven?
People seem to have this expectation that if they’re late for a meeting or appointment, everyone else should get out of their way, and become angry when they don’t!
You plan a party or dinner for a group of friends or family and expect that everyone will be happy to come, until you start getting the questions about “What’s being served?”, or “Are you inviting this one?” causing you pull your hair out in frustration.
We elect politicians to represent us and actually expect them to act in our best interests, and—Well, we can all see what happens with that!
In Jeremiah’s time the people of Judea expected that God would vanquish their opponents. After all, Jerusalem and the Temple had been standing for over 400 years since the time of Solomon! Their mighty God would come forth from the Temple and smite all those heathen out there, right?
Most of them ignored the warnings of Jeremiah. They had consolidated land, wealth, and power into the hands of the privileged few, ignored the plight of the lower end the of the social and economic spectrum, and had turned the worship of Yahweh into a good luck charm, while forcing Jeremiah and Baruch into hiding for daring to speak God’s truth.
After the formerly privileged few had been carried off to Babylon, the walls of Jerusalem torn down, and the temple and other buildings had been razed and burned, one of the people who had listened to Jeremiah, Gedaliah, expected that the Jews who remained could now see that Jeremiah had been right. Gedaliah agrees to meet with Ishmael to talk some sense into him. Ishmael promptly assassinates him, and then in terror runs off to Egypt, with the hapless Jeremiah in tow—Jeremiah, the prophet who spoke of the emptiness of expectations and instead preached the unwelcomed truth of God!
By Jesus’ time the Jews had come to build their own expectation of what the Messiah will be. Even John the Baptist, the one who said “Repent, for the kingdom of heaven has come near,” (Mt 3:2) has been caught up in this expectation of an earthly, militaristic Messiah who will free them from Roman oppression. John sends messengers from his prison cell asking “Are you the one who is to come, or are we to wait for another?”
Rather than answer directly, Jesus sends them back with the admonition to tell John what they have seen and heard: “the blind receive their sight, the lame walk, the lepers are cleansed, the deaf hear, the dead are raised, and the poor have good new brought to them”. There is nothing earthly, or political, in this pronouncement!
Jesus asks the crowd who is with him “What did you go out to the wilderness to look at? A reed shaken by the wind?” At that time, King Herod’s emblem on coins was a Galilean reed waving in the wind. Can you imagine our President going out to live in the wilderness dressed in camel’s hair and a leather belt, eating a diet of locusts and wild honey? Yes, the reaction from Jesus’ crowd would have been the same.
Jesus goes on to explain that John is the greatest of the prophets, but that even the least of those who believe in this new Kingdom of God are greater than John. The poor and outcasts are greater than all of Israel’s prophets?? What joy must have filled their hearts to hear this! What a complete re-write of expectations!!
Rather than a Messiah that will conquer the Romans and restore power to the Jewish people, Jesus talks of the violence done against the Kingdom of God by people who demand that God should be subject to their wishes, and not that they be subject to God’s way of living. In the hearts of these people Jesus plants new hope, and new life, but also a new expectation of persecution and rejection.
I ask myself “What are our misguided expectations of God today?” What quickly comes to mind is the end times pronouncements supposedly based on the Book of Revelation: that any day now the faithful will be Parousia’d up into the sky and God will smite all those disbelievers and abominations that are out there—all those people that have been declared cast-out, un-clean, not-Christian!
We wander through a society that teaches greed is good, that the purpose of life is to collect more toys. That those who have money are blessed by God, and those who have nothing are cursed and meant to be that way—that there’s no reason to clean up the mess we’ve made on this Earth since God is going to take all of the ”saved” Christians up into the sky. Does any of this sound like the Kingdom of God preached by Jesus? 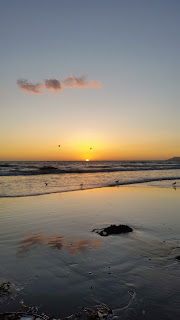 In our course on Christian Ethics we read a reflection, out of The Green Bible, by Bishop N. T. Wright, a prominent Bible scholar. Contrary to end-time signs of “The End is near!” or “Heaven or Hell: It’s your choice!” Wright’s reflection is entitled “Jesus is coming—Plant a tree!”
Wright points out that Paul writes in Romans Chapter 8 “For the creation waits with eager longing for the revealing of the children of God,…” (8:19) and also writes “We know that the whole creation had been groaning in labor pains until now; and not only the creation, but we ourselves, who have the first fruits of the Spirit, groan inwardly while we wait for adoption…” (8:23-24)
Does this sound like a creation that is going to be utterly destroyed? Would creation be waiting “with eager longing” to be wiped out? This sounds more like creation is yearning to be restored to new life! Just as we hope to be saved through the gift of grace by God, creation, too, hopes to be restored by the coming of God’s Kingdom.
God’s Kingdom is already leaking into the world through the hearts of her followers. The people of the Jesus movement are called to be the advocates for God’s justice and restorers of God’s creation.
As future deacons we are called to expose the emptiness of expectations of greed and destruction, and call people to a vision of new hope in the restoration of God’s creation and a new age of humanity as the beloved caretakers of God’s Creation.
In spite of our brokenness God calls us as heralds for his Kingdom, prophets of his Truth, and caretakers of all of his creation. Like all of God’s people before us we may face rejection and violence, and yet we give thanks for all that God has done for us.
In this journey to become deacons the words of Psalm 116 speak directly to us:
“How shall I repay the Lord for all the good things he has done for me?
I will lift up the cup of salvation and call upon the Name of the Lord.
I will fulfill my vows to the Lord in the presence of all his people.”
Amen.
By Deacon Greg M at October 24, 2017
Email ThisBlogThis!Share to TwitterShare to FacebookShare to Pinterest