A Message of Love

As you go through this transformation of becoming a Deacon you find yourself doing things you never imagined you could do--like preaching a sermon.
As much as I'd like to say "Boy, am I skilled at this!", the fact is the process you learn at the School for Deacons (sfd.edu) is equal parts of research and prayer. Each time I start working on a homily I suffer doubts of having anything to say, but somewhere along the process the message comes.
I preached the following at the Episcopal Church of St. John the Baptist Church in Lodi, CA on Sunday, October 29th, 2017:

In 3rd Grade my teacher, a nun in full black habit, started preparing us for our First Confession. Now what an 8 year old would have to confess is still beyond my comprehension! She handed out a list of sins, and explained that if you die with certain ones staining your soul you go straight to the bad place, but with others you stand in the hot waiting room until the spin cycle is done (OK, that last part is my interpretation!). It sounded like you were doing your laundry before you went on a long trip!
Now, handing out this list of sins is like banning a book: If you want to increase your book sales, try having someone ban it! The 8-year old me was sitting there trying to figure out what fun there might be in the lesser offenses, when a thought occurred to me:
“Sister! If I’m on my way to Confession and get hit by a bus, is it good enough that I was on my way there?” “No, you would still have sins staining your soul” she answered.
I raised my hand again “Sister! If the bus hits me after going to Confession, then would I be OK?” “Oh yes,” she replied, “your soul would be all white!”
I should have stopped there, but even back then I didn’t know better! “Sister! If God loves us, then why would he let the bus run me over while I was on my way to Confession?”
That did it! Out of the class I went.

Little did I know that another Roman Catholic, a priest and scholar no less, had a similar idea long before. Martin Luther had been studying this Jewish revolutionary named Paul of Tarsus, and drafted a list of 95 propositions to be the basis for an academic debate concerning the forgiveness of sins and the selling of indulgences. On October 31, 1517 (500 years ago this Tuesday) Luther mailed his 95 Theses to Albert of Brandenburg, the Archbishop of Mainz, and over the next several weeks posted copies on churches in Wittenberg  as an invitation to scholars for a debate.
The operator of a new technology called the printing press copied Luther’s 95 Theses and they began circulating like a wild fire all over Europe, sparking what became known as the Protestant Reformation. Luther would go on to develop the idea that we are saved through God’s grace and faith alone, and not by our works or deeds—a radical idea for a Church that believed in centralizing authority!

The people of 1st Century Judea lived under a Roman controlled theocracy. Local synagogues were dominated by the Pharisees, the Sadducees controlled Temple worship, and the Chief Priest was appointed by the Roman Prefect. In a land where most people couldn’t read, the scribes could read Scripture and record legal documents.
Over time these religious leaders had replaced the idea of faithfulness to God with scrupulous adherence to the 613 commandments in the Torah. How could illiterate people know which law to follow, or which one they violated, or how to make amends? Of course the Pharisees, Sadducees, and scribes were happy to help them find right relationship (righteousness) with God.

Then along comes this Rabbi from Galilee, Jesus, who stirs up the people with this talk of the coming Kingdom of God. Crowds start following him around the countryside, disturbing those in power.
The scribes and Pharisees hope to trap Jesus in a debate when they ask “Which commandment is the greatest?” Jesus answers them in a way they can’t argue with, and goes on to stymie them by asking them to explain how the expected Messiah could be David’s son when David calls him “Lord”.
The followers of Jesus who are listening to this exchange are suddenly filled with joy! “’Love God with your whole heart, and love your neighbor as yourself?’ That’s the whole law? Hey! I can live that way without having to memorize 613 commandments of the Torah, or asking the Pharisees!“
The people burst out laughing in joy, and also at the “dear-in-the-headlight” expression on the faces of the scribes and Pharisees, who become angry and murderous for being embarrassed in public by this upstart Rabbi.

For some reason I see Jesus trying to contain his smile throughout this whole event. Was he being intentionally funny, or did the scribes and Pharisees walk right into it? I’m not sure, but for me this idea of the fully human Jesus is what I most easily connect with in my faith.
It is difficult to envision God our Creator who is both within us and without, and not part of this space-time continuum, but somehow involved in it.
We have the Holy Spirit of God that reaches out into the world to inspire people to do crazy things—like becoming a deacon, or a priest!
We have an image of Jesus sitting on a thrown waiting to return to Earth to put all things in order, like we have pictured in our beautiful window above us.
While acknowledging the full divinity of Jesus, I also envision the fully human Jesus—the brother I can relate to—the friend I can cling to. 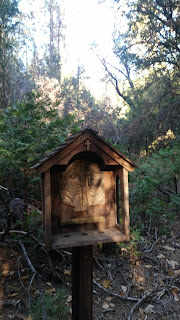 This is the Jesus who was fearful in the Garden; who wept at the death of his friend Lazarus; who was angry at a fig tree for having no fruit (Mk 11:12-14); who in a fit of exasperation called one of his closest friends “Satan”! (Mt 16:23)

This is also the Jesus, though, who enjoyed a good meal with friends and strangers (Mt 11:19); loved to tell good stories with meaning; changed water into wine at a wedding feast because his mother told him to (John 2: 1-12); and yes, he laughed and had a sense of humor, just like all of us. This is the Jesus I can relate to! This is the part of God I can have a conversation with!

Before I started at the School for Deacons I spent a year in discerning this call. I was really reluctant to follow this path.
I prayed, “You can’t really mean me, God! This clay pot you formed (Isaiah 64:8) was smashed into pieces early on against the hard, granite wall called reality and I’ve been trying to glue it all back together ever since.”
God said to me, “I am the glue.”
I prayed, “But I don’t even know if the pieces are put together right. I must look like a complete mess.”
God said, “Have you ever heard of Picasso?”
I said “Yes…”
God said, “He is one of my favorite artists. You look great to me!”
I said, “You think everyone is your favorite artist!”
God said “Yes, that’s right!”
I prayed again, “But Lord, this clay pot is full of holes and cracks, and if you pour anything into it it’s just going to make a mess all over the place.”
God said to me, “That’s right, now you’re getting the idea. I’m going to pour my love into your heart. You’re not supposed to keep it contained—you’re supposed to spread it all over the place—let it leak out!”

You see, once you realize that God loves every one of us, that each of us is the most important person to God, your heart can’t help but to erupt in a joyful shout of praise! I am important to God! Every single one of you—every single human, even the ones out there--are important to God! All of creation is important to God!
How can we respond to God’s love for us? “You shall love the Lord your God with all your heart, and with all your soul, and with all your mind. You shall love your neighbor as yourself.”
We are called as followers of Jesus to love every single person we encounter in this life, and find ways to reach out to them. I am answering that call in this path I am walking—in this way I am living—in this commitment I am making.
How will each of you respond to God’s call?

Country artist Hillary Scott has a song called “Beautiful Messes” that makes me smile whenever I hear it. It goes:
We ain’t perfect, no
We ain’t even close
We got holes in our hearts
We got scars we don’t show
But all that baggage we keep on dragging around
Ain’t it time we start laying it down?
Lay it down at the foot of the cross
Give it to the one who can carry it all
Even at our worst, to him, we ain’t lost causes
Just beautiful messes.
Amen.

By Deacon Greg M at October 29, 2017
Email ThisBlogThis!Share to TwitterShare to FacebookShare to Pinterest