Having just finished the 2nd Weekend of my 3rd year at the School for Deacons I have that strange feeling that I just started this process a few months ago, and at the same time forever and a day ago. The School for Deacons (sfd.edu) does more than educate the future deacon--it is a formative process that results in the building of a unique community of people.
When I started the process of discernment I had so many self-doubts. How would I get the work done? How would I have the time? How could I ever be "good enough" to be a Deacon? I've come to realize that I have been transformed by this process at School and in my Diocese. 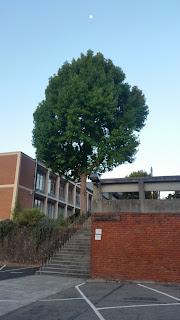 Preach a homily? Me??? Yet now I find myself doing just that, thanks to a combination of training, praying, and inspiration from the Spirit.
Here is my latest homily given at the School for Deacons on September 10th, 2017:

The Book of Exodus begins, “Now a new king arose over Egypt, who did not know Joseph” (Ex. 1: 8). This brief passage, almost a footnote, speaks volumes to us this morning. Even though it doesn’t appear in today’s reading, it is the event that leads to the confrontation between Pharaoh and Moses—between secular ruler and Heavenly Ruler.
Joseph, his family, and the Israelites were welcomed into Egypt centuries earlier when Joseph interpreted Pharaoh’s dream and predicted seven years of bounty and then seven years of famine. Joseph is appointed Pharaoh’s steward, and his project to store grain and food is such an overwhelming success that the people of Egypt continue to prosper under Pharaoh’s leadership while selling surplus grain to the kingdoms around them.
From a strategic standpoint Joseph’s plan to survive seven years of famine didn’t just maintain the status quo in Egypt. Seven years of a famine would have drained the resources of every kingdom surrounding Egypt. To feed their people, kingdoms would have sent money and goods to Egypt in exchange for food for their people. One year of this would be hard enough—seven years would have cleaned out the treasury of any kingdom. By the end of the famine, kingdoms who hadn’t already pledged loyalty to Pharaoh would have quickly folded in the face of any Egyptian offensive.
By welcoming these strange people of Joseph’s, and apportioning land in his kingdom for them, Joseph’s Pharaoh made a brilliant strategic move that magnified the strength of the Egyptian empire for generations to come.

So what happened? How did these people who gave Egypt a competitive edge over its neighbors end up as slaves 430 years later (Ex. 12: 40)? In my Union career I noticed that you could negotiate the best contract for a group of people that included raises, job security, better medical benefits, and improved pensions, and a week or so later be asked by the members “So, what have you done for me today??!!” Gratitude seems to last as long as short term memory!
These people of Joseph’s not only looked different than Egyptians—they acted differently, too. They worshiped a different God—“Heck, they don’t even know his name! They mutilate themselves as part of some agreement with their God! They smell bad—look at how many of them herd sheep! Just how many sheep does one need?” (I can see them complaining about this as they’re eating a leg of lamb for dinner. Think of who picks our crops in the Central Valley.)

Eventually Egyptians become envious of these “Joseph people”. “Why should they have all that land? What are they doing for us? “Let’s give Egypt back to the Egyptians!!!” In the meantime successive Pharaohs start discounting the value these people have brought to Egypt as they convince themselves that really it was Pharaoh God-King who made Egypt an Empire. Over time the imposition of laws and edicts reduce the descendants of Israel to slave status.
We aren’t told how many generations the Israelites lived as slaves for Egypt, but the only ones who knew freedom were Moses and Aaron. By the time of this morning’s reading, the specifications for the Passover remembrance, the Egyptians and Israelites had already witnessed nine miracles of these brothers from Midian.

While Moses claimed the mantle of speaking directly with God, Aaron was his spokesperson and performed many of the rubrics himself—almost a pseudo-Deacon! In this Passover event, however, it is God who performs the last act of freedom while Moses and Aaron are left waiting.
For the Israelites the miracles continued on: God led them with a “pillar of cloud by day” and a “pillar of fire by night” (Ex. 13: 21). The waters of the sea were parted, Pharaoh’s army was destroyed, and manna rained down from heaven. Moses is not gone long up Mount Sinai, however, when the Israelites fall back to making idols. “What have you done for me lately?” comes to mind.


Looking at it through this lens, the remembrance of Passover takes on new meaning. The lamb is divided proportionally based on who is at the table. There is order and equality to this meal of community, quite different from a herd mentality of “take what you can get”.
The “Law of Moses” becomes a “Guideline for a Loving Community”. The 40 years of “Wandering in the desert” is really a “Journey of Faith” that transforms these slaves into a community of people who trust that God cares for each of them individually, as they also come to recognize the value of each individual: “These are my brothers and sisters because God cares for them, too!”


Where are we on this Journey of Faith today? This country, that has as its motto “E pluribus unum” (out of many, one), finds its citizens marching around with torches dressed in uniforms of white shirts and brown khakis, or black masks in black clothes, demanding uniformity in belief or race.
People who have contributed greatly to this country, thanks to their diversity and work ethic, are victimized by people who have been left behind in this age of globalization and free trade, by a culture that worships the gold-plated idol of greed. Love is replaced by fear, and debate is replaced by violence. Is this the way of Jesus?


By the time of Jesus, the teachings of Moses, meant to bring people together in loving community, had been distorted by an aristocracy that used the “Law of Moses” to keep its people subjugated and oppressed.
·        Don’t rock the boat!
·        People who are different are excluded.
·        Fear is the motivator; uniformity is the requirement.
Any prophet that comes along to say otherwise is eliminated—John the Baptist, Jesus, Paul—all are executed!
Paul’s message in today’s reading is “’Love your neighbor as yourself.’ Love does no wrong to a neighbor; therefore, love is the fulfilling of the Law.” This is a dangerous message, because when fear is replaced by Love, miracles happen, and miracles free the oppressed and depose the oppressors.
Our Gospel reading this morning reflects the importance Jesus places on individuals. There is no demand that everyone must conform to the same standard. People who are different are not excluded or thrown out. In this reading Jesus stresses the importance of individuals in the community. We see here an encouragement to work out our differences—to talk to one another, both alone AND in community.
We are not expected to be uniform in our beliefs! We are only expected to love each other and be open to each other’s differences.

It is easy for people to give up on Love and fall back into fear and herd mentality—to forget the heights we have achieved thru “e pluribus unum”. Somehow it was easy for Aaron, our pseudo-Deacon, the man who witnessed the miracles that freed the Israelites, to give in to the herd mentality and fashion the golden idol while his brother conversed with God on Mount Sinai!
As Servant/Leaders of the God of Love we are called to be prophets for the God of Love to dispel the darkness, expose the fear, and call God’s people to wrap themselves in the Love of God and Love of neighbor.
I pray that God will give each of us the courage and wisdom to call our brothers and sisters into loving community. Jesus says, “For where two or three are gathered in my name, I am there among them.”
Amen.
By Deacon Greg M at September 11, 2017
Email ThisBlogThis!Share to TwitterShare to FacebookShare to Pinterest