New Life in a Clergy Collar

For most people, when thinking of the Deacon they picture them in their roles assisting or presiding at the Liturgy, or Offices (Morning and Evening Prayer, for instance).
In reality, though, the Deacon's main concern is focused on the needs of the community, both inside and outside the Church. Deacons have a desire to bring the Kingdom of God into this world by searching for those who are lost or ignored and bringing them back into the community, whether it's the Church or society.
How does one satiate this desire to expand God's Kingdom, however, when working a full-time job? This question has been the greatest challenge for me since I've been ordained, particularly since my job requires extensive travel.
As I meditated on this inner tension between supporting my family and serving

as a Deacon in the world, I thought of Paul of Tarsus, the original traveling servant.
Paul supported himself working as an itinerant tent maker, and presumably needed to focus much of his time on his secular career, with only weekly times of Sabbath open to spreading the Good News. Perhaps he collected some followers in his day-to-day activities, like going to the shoreline to wash or dye some fabric.
As I thought about this more, I wondered how I might encounter people along the way. I realized that I had opportunities while I was traveling to perhaps bring some light or calmness to the people I encountered. I decided I would make myself available to people while wearing my clergy shirt and collar.
My first efforts at this were in the weeks leading up to Christmas 2018. I had numerous flights between Seattle and San Francisco, and drives along Interstate 5 in Oregon and California.
The first challenge for me was not to isolate myself, as many of us do, by being focused on technology like smart phones and devices, or closed off with headphones and earbuds. By being focused outward, rather than inward, I encountered interesting reactions from fellow travelers.
Some would see me and quickly glance away. I wondered whether it was pain from a past encounter of clergy (how often we've heard of this in today's world!), or just an automatic response of rejection or isolation. 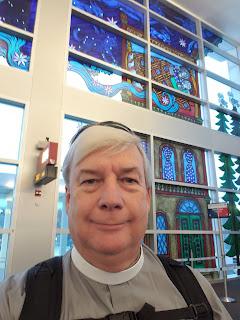 Some people nodded and smiled as they continued on, while others stopped to have a conversation. During the Holiday Season many people who are unaccustomed to airports and the ensuing crowds find this part of the Season to be nerve-wracking. They seemed to relax by just having someone to talk to, even when it isn't an overtly religious conversation. A smile and an open ear can go a long way to sharing a calm peace between strangers.
At one point I was sitting near my gate when a group of young adults (20-somethings) came along, and I moved over to give them space to sit together. When one of their waylaid members came walking up some minutes later looking at a clergy person sitting next to their group of friends, one of their friends piped up with "We were waiting for you to catch up before we started the service" and we all had a good chuckle.
It is in these brief encounters of socialization that one can find the mysterious sharing of the Spirit. Jesus said "Where two or more are gathered in my name, I am there." Bursts of the Kingdom's Light springs from a loving sharing between people.
As I travel along the Way, I also have come to notice those who also wear their faith--women with hijabs, religious sisters with their habits, turbans worn by those of Hindu or Islamic faith, or hats or yarmulkes worn by those of the Jewish faith. All have one thing in common: a deeply held conviction of their own faith with a desire to live their lives within that faith.
Wearing religious garb as you're out in the world makes you constantly examine how you are living and behaving. What would people think of a clergy person driving unsafely? Imagine a nun cutting a person off at the supermarket checkout. How would you react? 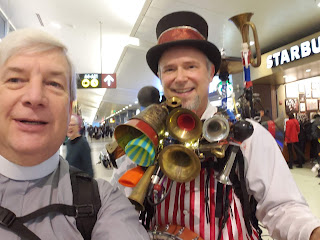 A funny thing happens as you wear the clothing of your faith: that inner calm that you hold within your prayer life leaks into the world as you live it. Being stuck in traffic becomes an opportunity to meditate, or take a minute to appreciate the world around you. Desiring to live with an open heart to God leaves you open to consider the brokenness of the world around you.
As we live our lives, Christians pray "May your Kingdom Come, and your will be done on Earth (like it is in heaven)". Living your faith, even without religious garb, opens this world to God's love. In essence, you become part of the Light of God's Kingdom. May you be blessed by God as you travel carrying that Light. Amen!

By Deacon Greg M at September 12, 2019
Email ThisBlogThis!Share to TwitterShare to FacebookShare to Pinterest